Misleading politics stories go viral online all the time. The action gets particularly frantic during an election campaign.

This is the story of how one tale – involving Liberal Democrat leader Jo Swinson and her husband Duncan Hames – became one of the most-shared politics stories in the first few days of 2019’s battle, with a potential audience of more than 1.5 million people.

A BBC Trending investigation tracked down the people, from an Italian in North Wales to a barman in London, who exaggerated genuine facts and helped the story go viral via some of Britain’s biggest political pages and groups on Facebook.

Multiple versions of the story exist, many with different details. But the false allegation at the core is the same: that Ms Swinson’s husband personally benefits from European Union funds and this is the main reason why she is against Brexit.

Where did it come from?

The first trace we can find of the story was in a tweet by an account called @SammyPants6 on 30 September, which showed a number of screenshots.

But the story really went viral a few hours later when a tweet by an account called “HenryVIII” was retweeted more than 1,000 times.

Some elements of the tweet are correct. Duncan Hames, who was an MP from 2010-2015, works for the UK branch of Transparency International.

The Berlin office of the non-governmental organisation received a grant of 4m euros (£3.4m) from the European Commission in 2018.

The European Commission funds many charities and NGOs and grants go to general accounts – not Mr Hames’ own pocket.

How the story got twisted

According to the viral tweet above, the grant paid to Transparency International, which works on anti-corruption projects, explains why Ms Swinson and Mr Hames “love the EU so much”.

But both have a long record of support for the EU. They supported Remain in the 2016 EU referendum, before Hames joined Transparency International.

The Liberal Democrats declined to comment for this story.

BBC Trending spoke to “Henry VIII” via Twitter direct message. The person behind the account claims to be an Italian man named Dino living in north Wales.

The account mainly shares posts written in Italian and about Italian politics, but we were not able to independently verify his identity.

“I wanted to know why Jo was so pro-EU,” he wrote. “I was told to always follow the money.” He says he posted the tweet after looking into Transparency International’s financial accounts, which are published online.

Two days later the story jumped from Twitter to a far larger social network. The following post appeared on the Facebook page of Michael Barton, a freelance writer based in London:

The post sticks to the same facts in the tweet by “Henry VIII”. Mr Barton told the BBC that he didn’t see the original tweet and instead compiled the post after conducting his own research.

This post caught on, and more and more people started talking about Ms Swinson’s husband in Facebook groups and on Twitter. Judging from the groups and pages where the story was spread, it’s clear that most of the impetus came from Brexiteers – some supporters of the Conservatives or Brexit Party, and others who are left-wing Labour activists.

The online rumours became so strong that the UK branch of Transparency International released a statement in early October.

“Transparency International UK (TI-UK) is independent and politically impartial and does therefore both engage with and objectively criticise politicians regardless of their political opinion or party affiliation,” it said. “TI-UK has neither advocated for or against the UK’s continued membership of the European Union.

“TI-UK is not working on any projects funded by the European Union.”

The story continues to spread

But that press release did not stop the story from spreading and morphing. It exploded into the mainstream when it was shared by Leave.EU, a pro-Brexit Facebook page with almost a million followers. This post was shared 18,000 times and received thousands of likes and comments:

It got even further traction over the next few days when it was written up by politically themed Facebook pages with big followings that purport to post news stories.

One called “Unity News Network”, which was set up by UK Independence Party activists, put up a post broadly similar to the examples above. The post linked to an article which hinted at “sinister facts” and asked: “Does Mrs Swinson have a vested interest in remaining in the EU?”

Oliver Down of Unity News Network told the BBC: “We did not imply anything but merely asked the question to allow readers to make up their own mind.”

Others pushed the facts of the story past the breaking point.

On 4 October a Facebook page and website called Nye Bevan News, which describes itself as “pro-proletariat” and “anti-establishment”, posted its version of the story.

This time it included clearly inaccurate statements: that Mr Hames “owns” Transparency International and that the organisation is a “family company.”

The editor of the page is Ben Jenkins, a 34-year-old originally from South Wales who works in a bar in London.

When he met BBC reporters, Mr Jenkins denied that he set out to be misleading, but described the wording of his post about Swinson as “spin”.

“We’re all Alistair Campbell’s illegitimate children,” Mr Jenkins said, referring to Campbell’s stint as the No 10 communications chief and the frequent description of him as a “spin doctor”.

“He taught us how to do this and he can deal with the consequences.”

Mr Jenkins said his page enlists a number of volunteer moderators. No money changes hands, he said, but his popular page – it has more than 113,000 likes – shares their posts.

The post reached a far bigger audience in pages and groups with names like “British Voice”, “WTO Brexit Now” and “We Support Jeremy Corbyn”, according to research by misinformation expert Maarten Schenk of Trendolizer.

These groups came from across the political spectrum, including communities supporting Labour, the SNP, the Brexit Party, UKIP, and the Conservatives.

While it kept spreading on Facebook, the post took a month to reach its peak. It was one of the most popular politics posts on the social network on 4 November.

It has now been posted by at least 248 different pages and groups, had close to 50,000 interactions (shares, comments and likes), and the story has now been viewed by a potential audience of over 1.5 million, according to analysis from BBC Monitoring. 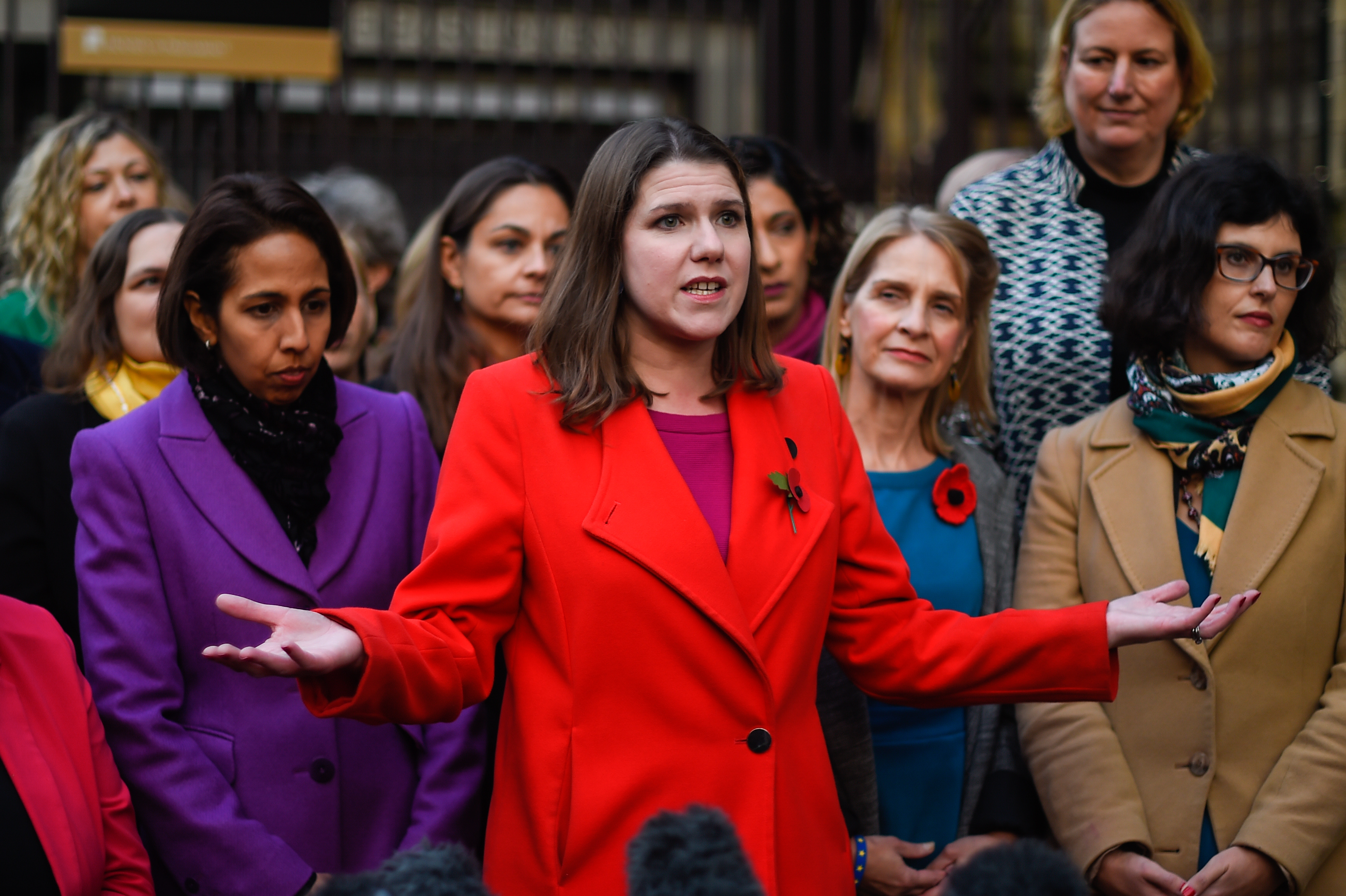 Where did the misleading story appear?

From one obscure tweet, this misleading story has entered mainstream conversation as the UK gears up for an election on 12 December.

When we wrote an unrelated article last week we quickly received an email saying: “It is widely reported that Jo Swinson’s husbands company has received in excess of £4 million from the EU, why doesn’t the BBC report this on mainstream news?”

The Swinson story is one example of a misleading story politics story going viral. But it’s not the only one – or even the first one related to the 2019 election.

One of the most viral election videos so far was produced by Joe.co.uk, a left-leaning site aimed at young men.

“Monster Crash” is a joke video with a serious message – it implies that Boris Johnson and the Conservative cabinet member Jacob Rees-Mogg stand to profit by engineering a financial crash brought on by a no-deal Brexit.

The video indirectly references a story which went viral in anti-Brexit circles, again at the beginning of October. Again there were multiple versions of the story, but at the heart of all of them were allegations that financial speculators who help fund the Conservative Party are pushing the UK towards a no-deal Brexit.

However, last month the prime minister renegotiated a deal with the EU, which Mr Rees-Mogg voted for. This would seem to pour cold water on the conspiracy theory that they are working to trigger a no-deal Brexit “monster crash” for financial gain.

As with the Swinson story, several of the elements of the story are true – for instance Mr Rees-Mogg does have a stake in a major investment fund.

But, as the BBC’s Simon Jack has explained, “there has not been enough evidence produced that a few shadowy financiers are pulling the strings of a no-deal Brexit puppet.”

Online misinformation has become a hot topic ever since completely made-up posts with fake headlines like “Pope Francis Shocks World, Endorses Donald Trump for President” spread during the 2016 US presidential election.

Today, misinformation more often resembles the story about Ms Swinson – deploying genuine facts out of context to point to a inaccurate or biased conclusion.

But the effect can be the same. As it spirals through the internet, and is rewritten and re-shared, kernels of fact fall by the wayside, and mistruths spread like wildfire.

Have you spotted misleading posts? Is there something the team should be investigating? Email us